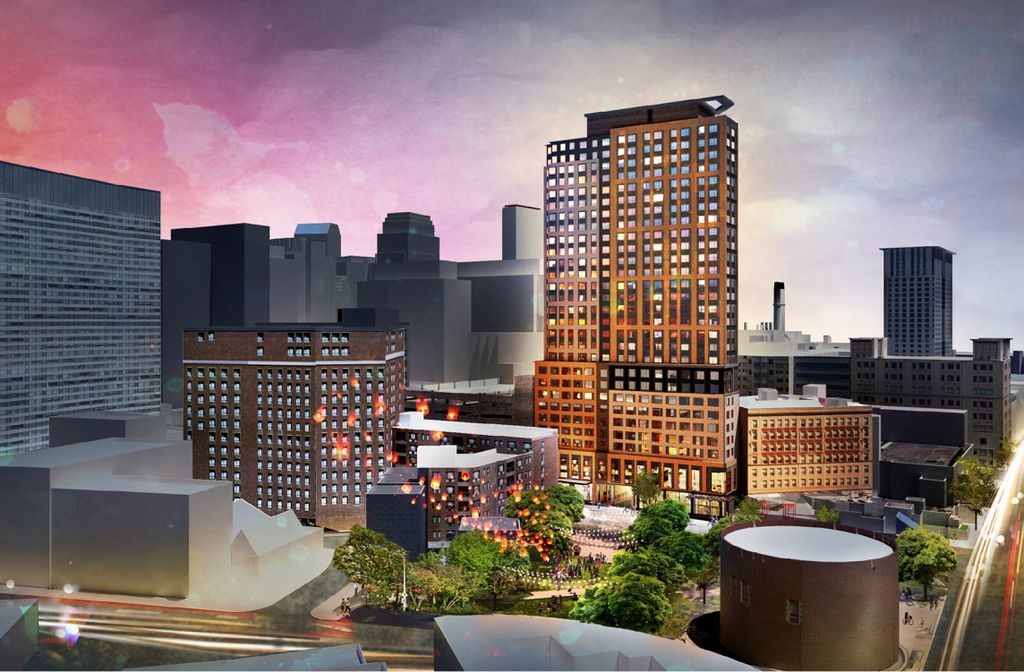 Could a parking garage lot in the heart of the Theatre District be a guide to the future of Chinatown?

A rare coalition of for-profit and nonprofit developers are betting millions that the answer could be, surprisingly, yes. But that’s getting a little ahead of the story.

The development giant Millennium Partners Boston has joined forces with the Chinatown-based Asian Community Development Corporation to build 168 units of affordable housing on a small lot nestled between the Boch Center, a hotel, and Tufts Medical Center. The project, once completed, figures to bring desperately needed affordable housing to Chinatown, a neighborhood where both housing and land are scarce.

That only hints at its importance to a community facing encroachment by development on all sides and running out of places where its predominantly immigrant, low-income residents can live.

“In Chinatown, where we really have very, very little land left, we want to do as much as possible,” said Angie Liou, executive director of Asian Community Development. “This is really a rare opportunity.”

The piece of land to be developed, known as Parcel 12, is owned by the Boston Planning and Development Agency, and the Chinatown community has eyed it for years as a spot that should be put to much better use. Plans and promises for the parcel have come and gone since at least the 1980s, Liou said. But community groups don’t have the cash to pull off major development projects, and the big developers were otherwise occupied.

Then something unexpected happened. As part of Millennium’s deal to redevelop the decrepit Winthrop Square Garage into a major office and condo tower, the company was required to pay for 1110,000 square feet of affordable housing. Under city policy, developers can — and often do — satisfy their obligation by simply writing a check to the BPDA. But the developers didn’t want to just write a check.

“We’re kind of sick of just paying into the process,” said Joe Larkin, principal of Millennium Partners Boston. “When we looked at all the millions of dollars we’ve paid in the past . . . we’ve become such an appreciator of the city that we — myself and our partners and investors — really wanted to do something more.”

“Something more” quickly became forming a partnership with the Asian CDC and finally making the long-delayed plans to build some affordable housing on Parcel 12 a reality.

“Angie literally identified the site for us,” Larkin said. “We thought in Chinatown we could do something really cool.”

For Millennium — whose projects include the Ritz-Carlton on Avery Street and the Millennium Tower in Downtown Crossing — affordable housing was a new and significantly different arena. Liou is helping to guide the rich folks through the maze of regulations and approvals, while hoping to secure more city and state funding in the process.

The current timetable calls for breaking ground in early 2021, with a two-year construction timetable. As for who will live there, the city will eventually hold a lottery to determine who gets the units. Liou says 4,000 applicants are typical for 100 units of affordable housing — a testament to the need, in Chinatown, and beyond.

Those applicants will face long odds — a realization that gave Larkin pause.

“To tell you how this relationship works, the first thing I thought of was how 100 families are going to have their lives changed. And Angie said me, ‘Yeah, and there’s going to be 3,900 families that are going to be disappointed.’ That was what hit me the hardest, how huge the need is.”

The problem of housing isn’t going to be solved by one project, of course. But any solution will require collaboration and creativity — and this unusual partnership has plenty of both. Two organizations separated by a few blocks — and untold millions in resources — have found common ground. And they’re building on it.