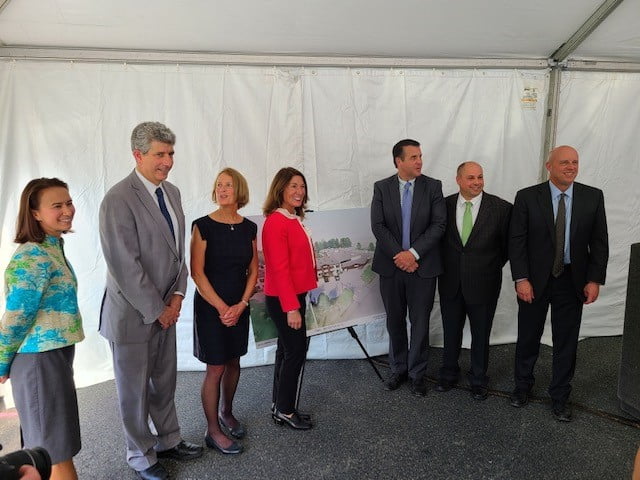 For the second time in his tenure, Secretary of Housing and Economic Development Mike Kennealy spent several days this fall on a tour of many affordable housing projects in various stages of development. The Department of Housing and Community Development (DHCD) staff planned the itinerary of the tour to all of the regions of the state, and Undersecretary Jennifer Maddox, Kate Racer, representatives of sister state housing agencies, private lenders and investors, and other state and local officials accompanied the Secretary.

Several CEDAC staff joined events on the tour, and I personally attended events on six days over the past month, both visits on the official Secretary’s Tour, and also a few project events that were not part of the official tour.

It is essential to visit these sites and communities to understand the impacts of our work. These tours also offer a valuable opportunity to meet our developer partners, state and local officials, and funding partners.

My first day on the tour was September 29th in Boston, where we visited the just completed Stone House, which provides permanent supportive housing for survivors of domestic violence. Both CEDAC and CIF committed financing to this project that co-locates housing and child care programs. The tour then visited the set of active projects in Jackson Square, including: 125 Amory Street (Boston Housing Authority/The Community Builders), 25 Amory Street (Jamaica Plain Neighborhood Development Corporation), 250 Centre Street (The Community Builders), and Mildred Hailey Apartments (Boston Housing Authority/Jackson Square Partners). The joint venture by three CDCs/non-profit developers, Urban Edge, JPNDC, and TCB (known as Jackson Square Partners) has driven the large-scale transformation and revitalization of an urban neighborhood that had been abandoned for decades following the community’s defeat of plans to build an interstate highway through it. 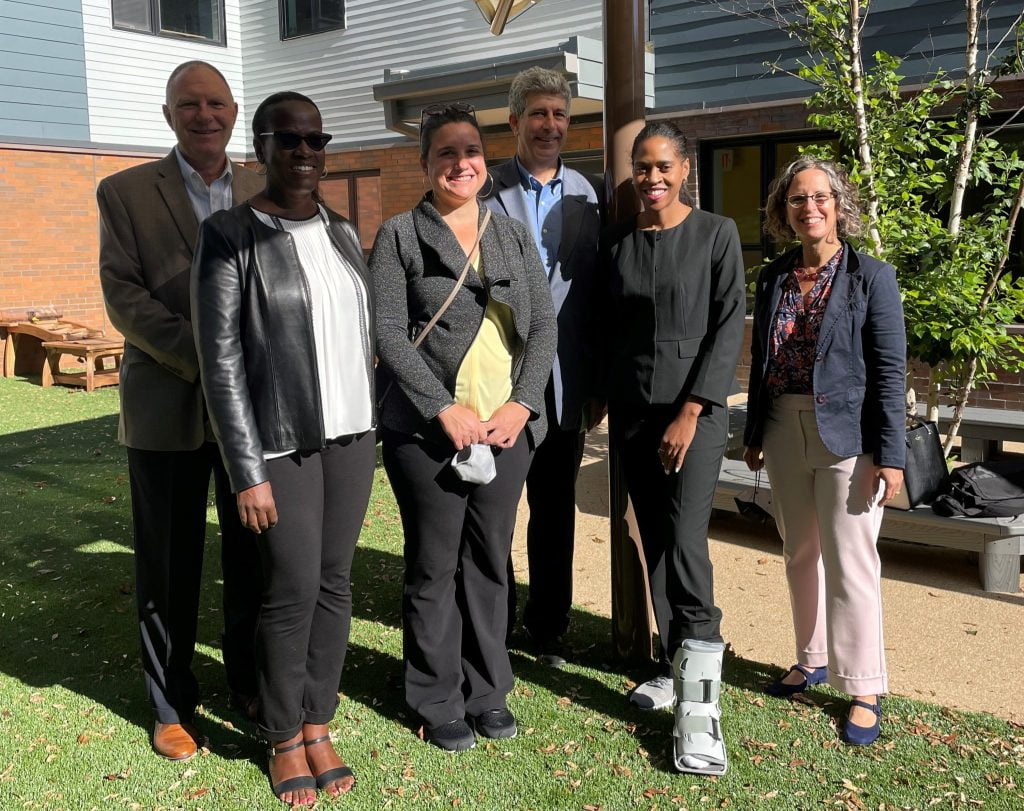 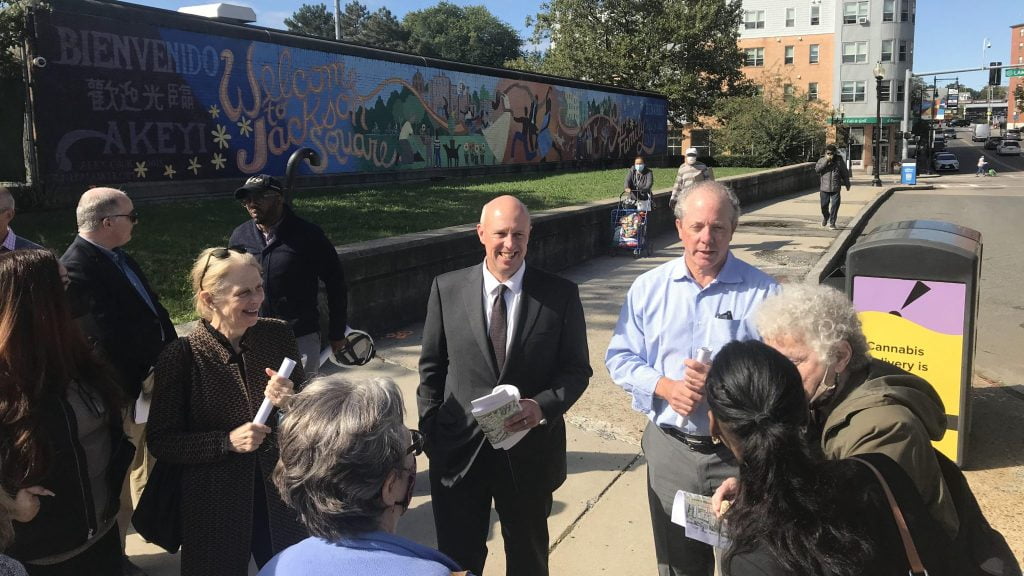 The following day on September 30th, I traveled to Medway to help Metro West Collaborative Development cut the ribbon and celebrate the completion of Glen Brook Way Apartments, 48 units of affordable family housing. I was pleased to see that a suburban community welcomed the creation of large-scale and dense affordable multifamily housing, supporting the smooth zoning approval process, and demonstrating its commitment with $2 million of local Community Preservation Act (CPA) funds. 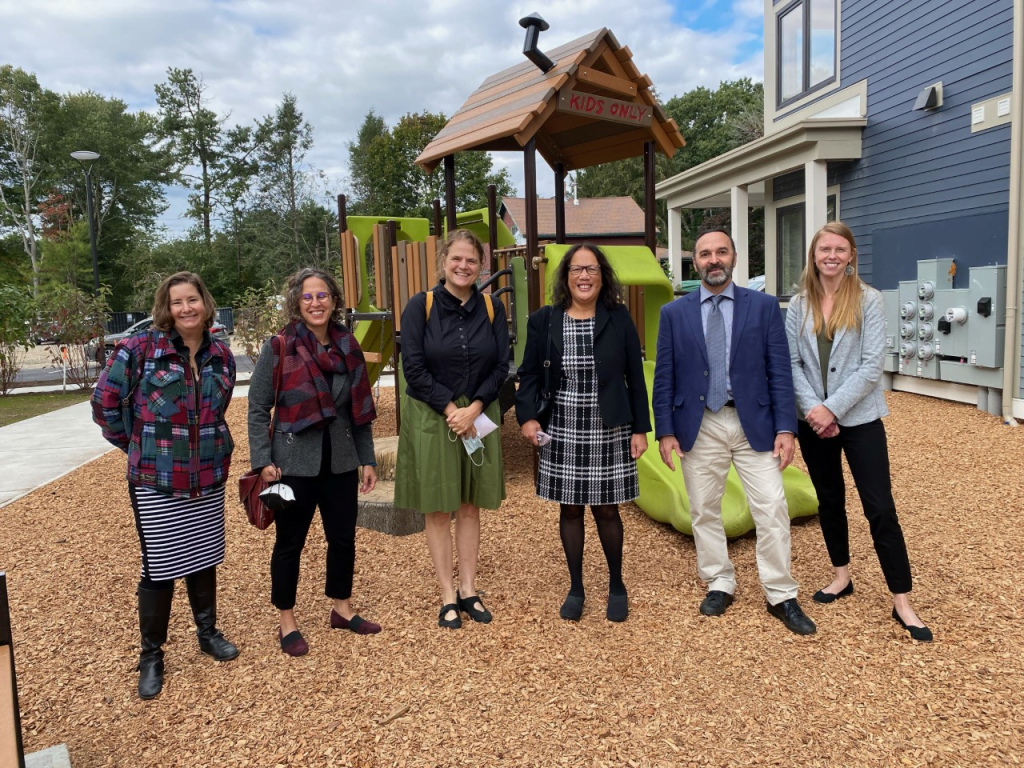 Day 3 of my tour on October 7th took me to Worcester, and the ribbon-cutting of 126 Chandler Street by Worcester Common Ground (WCG). Many aspects of this project and event are noteworthy: recognition of a prominent Black family from the neighborhood who donated land to WCG; the rooftop greenhouse with amazing views which will be used to train youth in urban gardening and fight hunger in the community; an impassioned plea by the City Manager to community residents to get involved in city planning efforts that seek to build on the investment of this new housing to revitalize the Belmont Street corridor; and an impressive turnout by WCG board members and community residents that demonstrated the best aspects of community development. 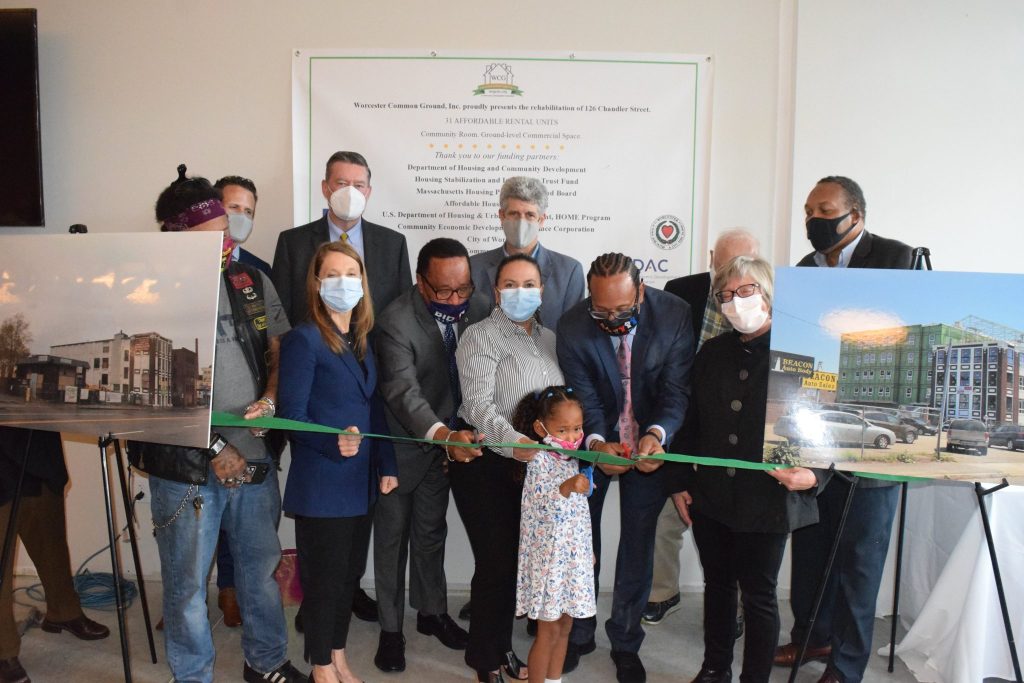 On October 12th, the Secretary’s tour visited the South Shore, with the highlight a stop in Brockton at the new Roadway hotel conversion that Father Bill’s & Mainspring has undertaken. Father Bill’s expects that this addition of 69 new permanent supportive housing (PSH) units will cut in half the homeless population in Brockton. Lieutenant Governor Polito joined the entourage, where she emphasized the importance of the PSH model that this project represents. This site visit presented a great opportunity to show senior Administration leadership the results of the new rolling NOFA that offers state funding to SRO conversion projects, of which the Roadway is the first. We are in discussions on other potential projects that hope to replicate the Roadway model. 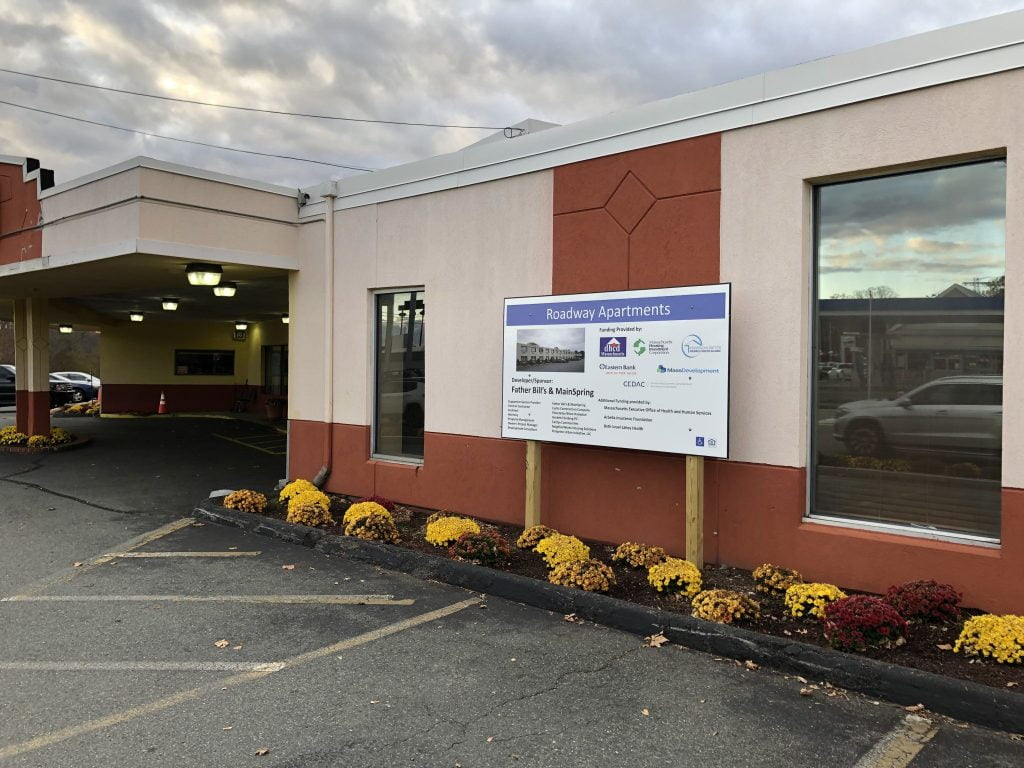 The Secretary’s tour landed on the North Shore on October 14th, where we started the day in Rockport with a visit to the future site of Harborlight Community Partners’ (HCP) Granite Crossing project. This transit-oriented development is also multi-generational, with units designated for both elders and families. The most impressive aspect of the project was the solid community work by HCP to build local support for new affordable multifamily housing. An abutter to the site is a champion of the project, and spoke of the excellent listening skills that HCP director Andrew DeFranza used as he discussed the housing plans. This time invested in meeting with neighbors led to a smooth permitting process and the approval of local funding. 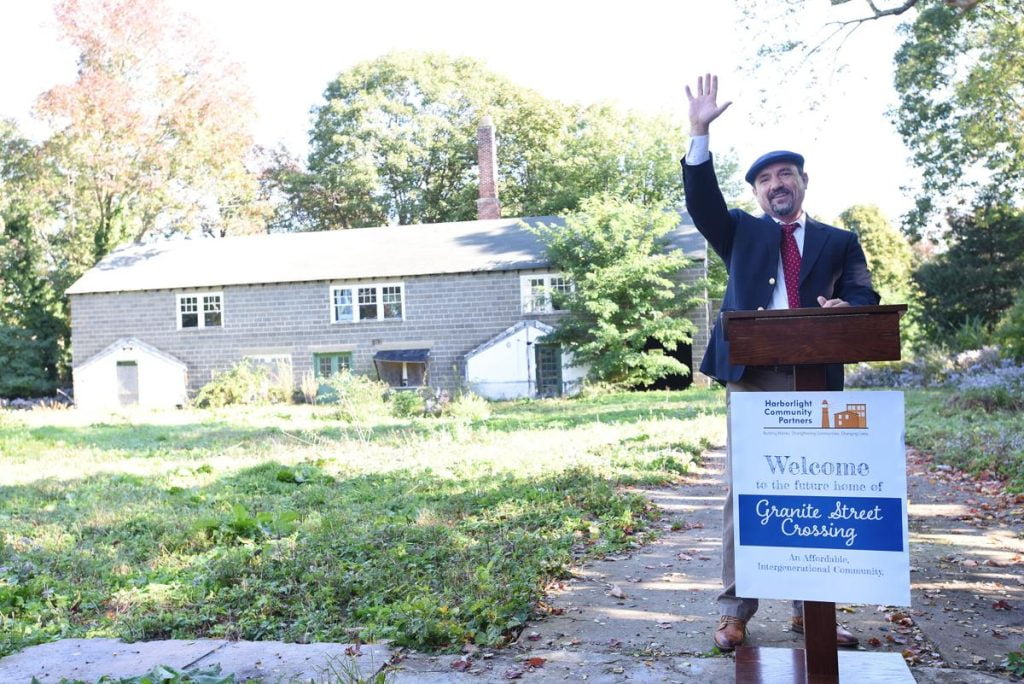 My final day on tour was October 22nd, when we cut the ribbon on two impactful projects in Holyoke. In the morning, Way Finders (WF) hosted an event for the completion of Library Commons Phase 1, where we celebrated 38 new and rehabbed units in a distressed neighborhood near downtown and a block from the public library in which the City made a major investment. New CEO Keith Fairey presented the impressive new project as an example of WF’s work in the revitalization of the neighborhood and City, and Phase 2 will continue this process. We also heard moving testimony from a single father and new resident, who recounted his recent experience of homelessness and the tremendous impact on his family of being selected in the lottery for one of the new units. In the afternoon, we celebrated the completion of Lyman Terrace by The Community Builders and the Holyoke Housing Authority, a redevelopment of this 1930s era public housing. The tenants and local officials were celebrated as heroes, by waging the successful effort to preserve the project rather than demolish it. 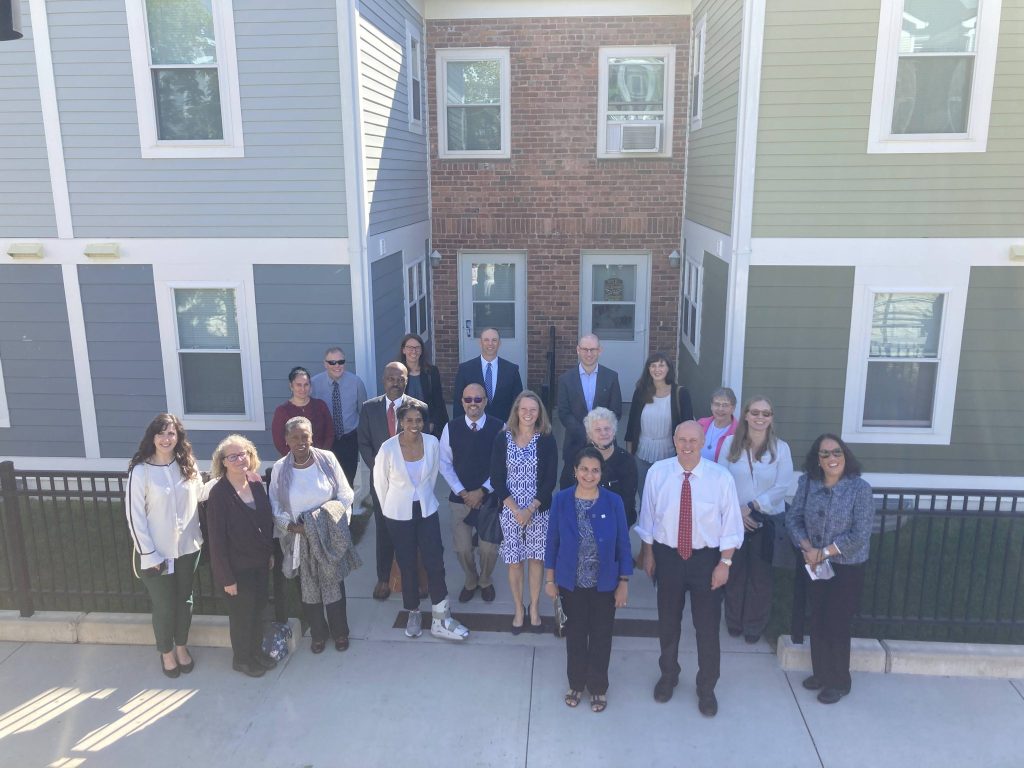 As we prepare for the outcome of legislative decisions in D.C. and Beacon Hill, with the expectation of increased resources for affordable housing production and preservation, the fall housing tour was an effective and inspiring activity to showcase the successful efforts to meet the housing needs of communities across Massachusetts.  I have shared some reflections on just a sample of the large number of projects featured on this tour.

Congratulations to the DHCD staff who planned this housing tour, as well as to the CEDAC staff and our non-profit partners who worked on so many of the projects featured on the tour.