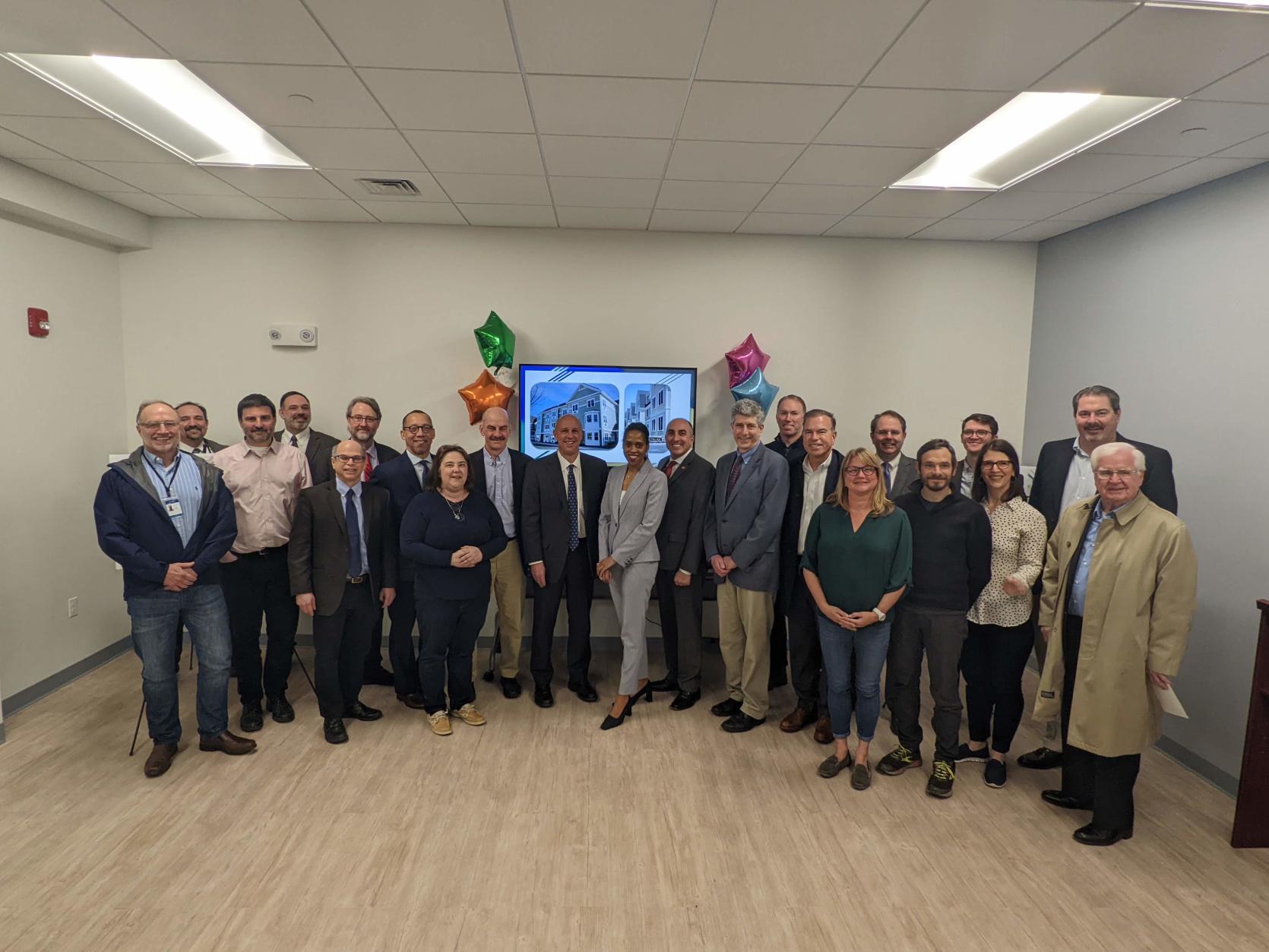 BOSTON, 29, April 2022 – Community Economic Development Assistance Corporation (CEDAC) was delighted to join Housing and Economic Development Secretary Mike Kennealy in Gloucester on April 15th for the announcement of $63 million in new funding awards for 14 affordable housing projects across the Commonwealth. The Secretary was joined by Housing and Community Development Undersecretary (and CEDAC Board Chair) Jennifer Maddox, and CEDAC Executive Director, Roger Herzog, along with several state and local officials, and many representatives of the project sponsors receiving funding awards.   The YMCA of the North Shore hosted this event in their beautiful new Gloucester facility, which also features an early education program supported by CEDAC’s affiliate, Children’s Investment Fund.

Led by the Mass Department of Housing and Community Development (DHCD), the awards will assist with the construction of 479  new units of affordable housing targeted to  low-income households, with another 150 units designated for extremely low-income families or individuals  often transitioning from homelessness. DHCD also awarded federal and state low-income housing tax credits, which are expected to generate over $200 million in equity to support both new construction and the rehabilitation of existing housing.

“With this round of affordable housing awards, we continue to expand the Commonwealth’s portfolio of new housing units to meet the needs of households of all income levels,” said Governor Charlie Baker in a press release.  “As we continue to tackle the state’s housing crisis, these projects will result in meaningful progress toward our goal of enhancing access to safe, quality, and affordable housing across Massachusetts.”

“These projects are the result of key partners working together to produce needed new housing in Massachusetts and I’m excited we can provide important financial support to make these new units reality,” said Housing and Economic Development Secretary Mike Kennealy.  “Affordable housing development is truly a team sport, and the cooperation and dedication to make these projects happen are incredible testaments to the strong affordable housing ecosystem in Massachusetts.”

“Today’s projects include a mix of new construction, historic rehabilitation, and transformative investments in our public housing stock. In Fitchburg and Springfield, we will see innovative, adaptive reuses of historic properties, and new construction will add vibrancy near the new Polar Park in Worcester,” said Housing and Community Development Undersecretary Jennifer Maddox. “We are incredibly proud to invest in projects that will invite new residents to communities, enhance neighborhoods, and ensure current residents can access stable, affordable housing. Here in Massachusetts, we have a strong network of affordable housing developers, funders, and advocates who have helped us bring thousands of new affordable units to the market over the last five years, and we look forward to continuing this work.”

“The projects announced in DHCD’s latest funding round represent the continued successes we are able to achieve through work with our non-profit partners and the Commonwealth,” said CEDAC Executive Director, Roger Herzog. “We remain committed to doing everything in our power to facilitate the creation of new affordable housing at a time of particularly acute need and look forward to working with Governor Baker and future administrations in service of that goal.”

CEDAC is proud to have committed a total of over $5.5 million in early stage predevelopment and acquisition financing  to 7  of the 15 total projects announced, including these projects that secured DHCD funding awards: